My eldest son is off to Morocco tomorrow with his girlfriend. I am quite jealous. They fly into Marrakech and are keen to tour the south of the country. I thought I would make them a dinner of a good sea bass tagine to celebrate. At this time of year I love the warmth of a Moroccan meal. Those spices and earthy sweet and sour flavours make a delicious winter meal. Cinnamon and clove flavours infuse the house, and it’s a great way to share food. 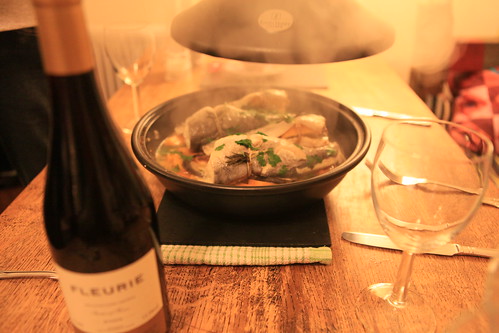 I once spent a month in a big old VW van seeing how far we could get down into the western sahara, we did pretty well seeing as we had little money and no proper visas. The vastness of the desert played tricks with my mind. I got very psychedelic and contemplated buying a camel and drifting south down the coast with a surfboard strapped behind me. Morocco truly expanded my consciousness. The huge silent vistas of the southern desert were incredibly humbling.

During that time we had a tagine nearly every night. I loved the simple cooking and sharing- the tagine both bakes and stews at the same time. Over the coals outdoors it creates a small oven, and meat, fish and vegetables cook succulently with the bright spice and fruit flavours sealed in. A good casserole dish can be used in the same way if it is hob proof though the tagine hat shaped lid really works to keep the heat in and the flavours mixing 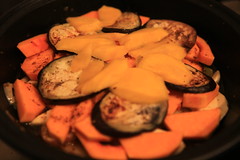 Tonight I laid 4 prepared sea bass over a tagine of butternut squash, potato, onion, celery, aubergine, mango and parsnip, in a stock with cinnamon, cloves, paprika, honey and coriander.
I gutted, scaled, headed and tailed the bass, and stuffed with a slice of lemon. meanwhile I stewed the onion, celery, some garlic and potatoes in oil in the base of the tagine before layering butternut, parsnip and mango on top, finally laying the fish on top, and pouring half a cup of the stock over all. I cooked it in the tagine for half an hour and sprinkled some coriander over for the last 5 minutes.
When we took off the lid the sweet-sour cinnamon-lemon flavours really came out, the fish was delicately steamed and we ate quickly and quietly. 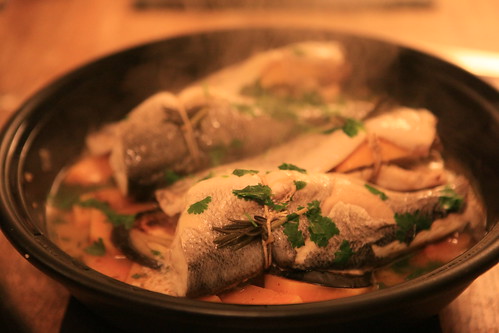 For  a wine I chose a light french red of medium quality- A bottle of Fleurie from beaujolais. the light fruit and easy drinking suited the strongly flavoured bass. Most vintners will have a good beajolais or fleurie available, this one did the trick being a last minute buy from Morrisons at about £8.00

Have a great time Noah