Making a Tagine in my last post awoke a set of recollections of the desert that had lain dormant for many years. I contemplated on how the open sky and still landscape can affect you profoundly. How you can be alienated by the culture, so self sufficient and unwestern. I have seen fellow travellers succumb to mental health issues. It often seems to happen when travellers are far from home in an alien environment that the mind wanders. 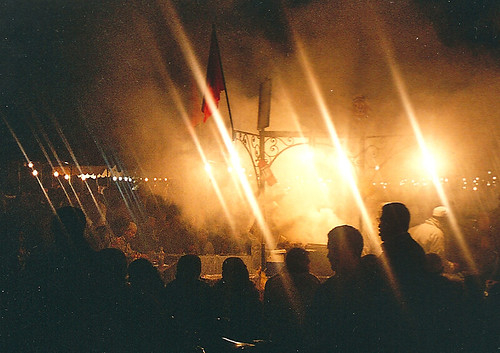 A food stall at a street market

I once spent a month of so with some friends in an old van seeing how far south we could get. We somehow passed into the western sahara, and headed down a long seldom used road into the desert. I took some psychedelics at an oasis with a hot spring. It was used by Berber nomads for healing skin complaints.  Under deep cowls I saw hideous disfigurements and diseases. The urge to escape from the heated dark rooms and quiet suffering was strong. I fled to the outskirts of the village and climbed a hill to spend what seemed like hours watching a still and silent panorama, a long valley full of ochres and browns on a huge scale. Not the slightest trace of humanity could be seen.

Recently I looked up a passage from – The Sheltering Sky’ by Paul Bowles. He explores many of these themes and expresses the sense of ennui, fear and spiritual bankruptcy that can develop in that bright white landscape. The high desert sun eviscerates, bleaches and exposes the soul of all things. 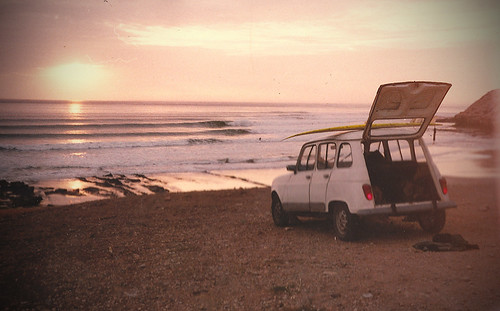 Killers breaking through to The Source, Taghazout

In Bowles’ novel a young couple pass beyond the reach of home and friendship and are forced to  confront the truth in themselves and their relationship in the deserts of post war French North Africa.

From the chapter ‘The Earth’s Sharp Edge’, this is Kit recollecting her husband Port

And Port had said: ‘Death is always on the way, but the fact that you don’t know when it will arrive seems to take away from the finiteness of life. It’s that terrible precision that we hate so much. But because we don’t know we get to think on life as an inexhaustible well. Yet everything happens only a certain number of times, and a very small number really. How many more times will you remember a certain afternoon of your childhood, some afternoon that’s so deeply a part of your being that you can’t even conceive of your life without it? Perhaps four or five times more. Perhaps not even. How many more times will you watch the full moon rise? Perhaps twenty and yet it all seems limitless…..

Paul Bowles wrote the novel in 1949. He widely recorded and studied Moroccan music and was a gifted musician and composer.
He lived for over 50 years in Tangier with an open door policy to visitors. He was a contemporary of Burroughs and Ginsberg, Capote and Gore Vidal. He wrote music for Tennessee Williams, and composed an opera based on a Lorca poem. He translated the written and unwritten great Moroccan story tellers. He died in 1999, not long after I read this superb novel