I posted this last week on the fall of Ben Ali from Tunisia, as I write Mubarak is reported to be moments away from losing his hold on the country. 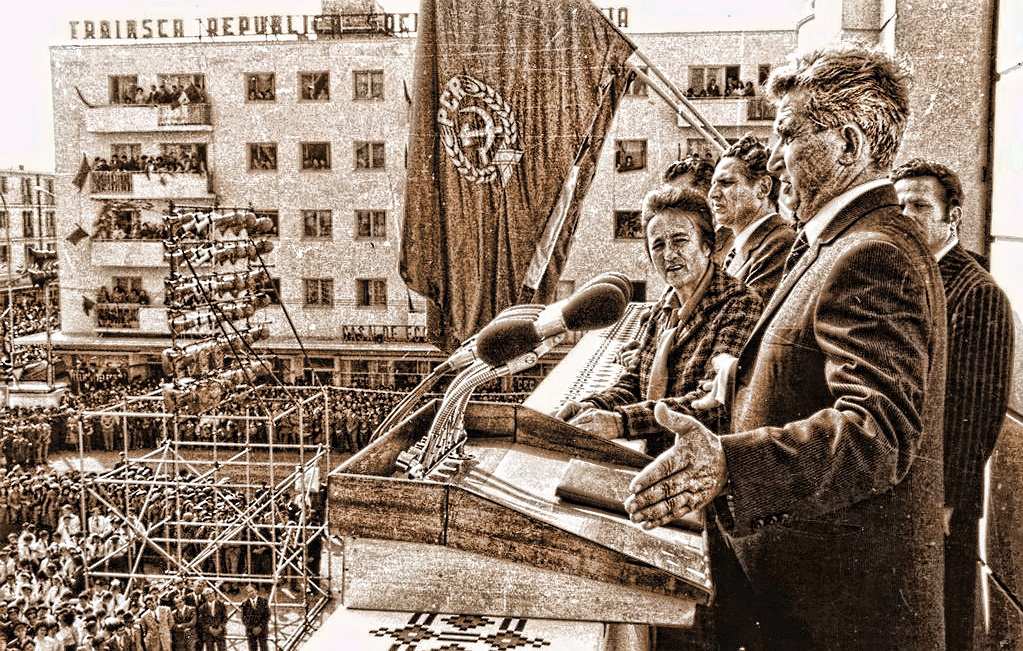 Caecescu, with the realisation his country despised him

With the rapid departure of Ben Ali from Tunisia yesterday I spent the evening contemplating human culture and the fragility of the powerful. I was interested in the framework of our societies, small and large that allows the bully such freedom, until the balance tips and the leader falls.

I wonder what the mathematics of the despot are. What allows the growth? is it charisma, or luck and boldness, and what causes the fall. Is it a small show of weakness, or a point at which the populace say enough is enough? like madness I am sure there is a fine line and the more extreme the leader the more violent the repercussions. I am sure there are a few countries now contemplating that fine line. If there is any advice for the tyrant it is keep an overnight bag nearby, make sure your cash is secure and safe, and make friends with another country nearby in case you need a bolt hole. Mussolini and Ceaucescu failed miserably, ultimate power ultimately blinds.

When Margaret Thatcher was attacked by ‘the men in grey suits’ (ironically also a surfing euphemism for sharks) it seems her cabinet had at last turned against her, she left Downing Street in tears days later. Thatcherism, a form of moral absolutism was finished. Her fawning courtiers struck.The stronger you are the quicker you fall. Et tu Brute? If there are seven ways of telling a story there are only a couple in Politics.

Ben Ali was very lucky to reach Saudi Arabia, the retirement village of the African despot (see Idi Amin). After 26 years of rule, it was not until he and his close family were in the air that negotiations were begun to find a new home. France turned him away in the air. Sardinia allowed him to refuel only after he was given permission to enter Saudi, a lucky escape. His second in command is now ruler and has arrested the rest of the family that weren’t on the first flight. He must of had a long time standing beside the throne looking at that comfortable cushion.

The accoutrements of power belie the origins and our still primitive or perhaps coded methods of expressing that. In the west we may scoff at the animal skins used by sub sahara Africa to express power, yet our Lords still wear ermine, our ambassadors white feathers, the Queen’s guardsmen wear bear skins. The throne a symbol of wealth and wisdom. As is the mace, orb and crown, so prominently displayed with gaudy gewjaws of precious stones in the expensive headdress. The basics have not changed since the old tribal kings of the dark ages and their oak thrones.

The modern world is still full of these anachronisms: from the services salute that says ‘you are powerful like the sun, and I must shield my eyes’. To the notion of mayoral necklaces, and on up to Airforce One, the great presidential symbol of prestige and power.

The diction ‘ultimate power ultimately corrupts’ seems to hold true in nearly every occasion, and also that power is like holding onto a balloon, you can go higher but eventually you will have to let go.

Ceaucescu in 1989 had led a country for many years in that most egocentric of power affirmations the personality cult. In mid December of that year in front of thousands demonstrating outside the palace came the epiphany that he was hated by his subjects. He hastily summoned a helicopter, flew to another palace to pick up some things (a bad mistake) and took off for the border. In that time the army had taken control and they ordered the pilot down moments from safety. Caeucescu was tried on Christmas Day 1989 in a cold austere room behind a plain school table with his wife, both wearing overcoats. The cold war era military uniforms ranged against the nervous couple in that depressing room is like a painting by Goya. Nicolai fiddles nervously with his astrakhan hat, he stops his wife from shouting at the court, he holds her hand. Some soldiers enter and tie their arms with electrical flex. They are shot outside moments later. The film of these last moments is online- it’s harrowing and not something I want to post

North Korea has a family run business of a personality cult in a precarious position. Kim Jung-Il seems ready to hand over power, but he knows that the moment must be well judged. Any sign of weakness will be ill advised. If succesful it will be the first time in human history when a third generation has held power. A power that requires the largest army per capita, one of the lowest standards of living, one of the most appalling records of human rights and palaces worthy of the late Michael Jackson’s imagination.

Perhaps we are seeing the end of this type of dictator. Control of the media is becoming less available with every mobile phone sold. If the 19th century was the age of the colonial powers, and the 20th century the age of the nation states, where do we go from here? I imagine many of the last dictators are watching satellite news tonight and thinking the same thing.