He wakes in the predawn gloom, the tent sagging with wet. light rain draining in lines down the blue fabric. the black plastic floor cold, damp, and bare.

It is the second day working in the vineyard. He is tired, yesterday had been a long, hungry day. His clothes are damp beside him. His trainers lay between the inner and outer tent ruined. He turns over, another two hours before work, awake, uncomfortable, damp, wanting more rest.

The day before he had woken before light and said a hasty goodbye to his friends sheltering in a disused boat shed on the banks of the Gironde river, a few minutes walk from Libourne. He had found work and they had not. They would be returning to their homes, weeks of surfing and small jobs in the holiday town of Biarritz had been their summer and now it had ended.

He had a long walk yesterday to Chateau La Dominique to begin work. And he had walked over twenty miles the day before searching the vineyards for jobs. His plimsolls were ruined, damp, rotten and splitting. Yesterday he was forced to jog the last mile to get to the vineyard on time. The boss gave him some secateurs and a basket and glanced at his damp t-shirt and ruined shoes. He began work, head down, back aching, nose dripping. A flock of starlings whirling over the heads of the little group among tendrils of low cloud.

At lunch the workers filed towards a barn. He was expecting food, somehow, hoping, but the barn held no such luxury. The other workers sat on old machinery and took out lunch pails. He had none. A depression came low on him. He went out to the yard and drunk water from the tap. Then set up his tent under an oak behind the barn. When he had finished he fell inside and took off his shoes and socks. He had blisters, he slept for an hour then dozed until he heard the others getting ready and the tractor starting. Two o’clock, another four hours under the grey skies stooped double.

When the day had finished he made a point of saying goodbye to his new work colleagues. He had hoped someone might take him into town so he could spend the last of his money on some tins of food. But the two people he asked were in a hurry to get home and weren’t heading that way. He had to eat so he began the walk down the drive, an hours walk into town if hitchhiking failed.

The boss came past in his old car and stopped. He took him to an agricultural store and bought him a pair of low cut wellington boots and a set of cheap waterproofs. He also pulled off some notes and gave him two days sub, less the cost of the waterproofs then took him to the supermarket and waited while he bought some food for the week. He told him he would bring in a gas bottle and a stove the next day, then drove him back to the chateau. He knew he was grateful but they both said nothing. Things were looking up. The rain had stopped.

The rest of that long ten days on the vendange were wet. He felt lonely, older. The days of travelling and living hand to mouth were waning. Where it had been so romantic it now seemed so worthless. He tried to make friends with the other workers but he felt ostracised by them. He realised his own demeanour did not attract company. Of an evening he spent hours in his tent watching the light change over the vines. With two days to go they had a day off on the Sunday. He walked into town to the launderette to wash his clothes. If there was no more work in the region, he could either head north to the Champagne region, or east into Germany. It would be only a few weeks there either in construction or catering before the ski resorts began hiring.

He put his newly washed clothes on to dry and went into a nearby bar for a drink. It felt good to sit at the bar with a beer, and another. When he went back into the launderette his bag had been stolen. It had little in but a notebook and a paperback. The attendant had seen nothing. She gave him a black bin liner. He put his clothes in it and went back to the bar for another beer, and another. It was raining again, it would be hard to hitch hike back to the chateau in this weather. He stared out of the window at the street life, a woman hurrying into a car in the rain. A couple queuing for pizza. The cinema reflecting purple in the puddles. He knew no one here, no one knew him. A complete stranger. 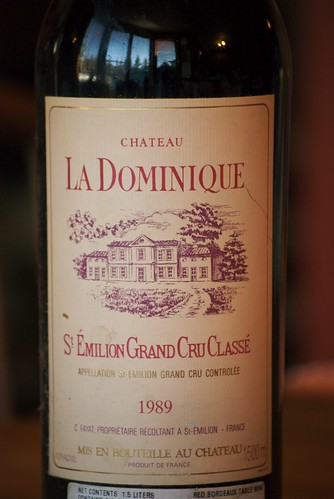 Chateau La Dominique is another very good St Emilion, made in a modern style with plenty of weight.  In Alan Hollinghurst’s English novel ‘The Line of Beauty’ the protagonist  a gay tory political climber in 1980’s London boom years learns to love La Dominique ‘Like Petrus but without the cost’. It’s a fair simile, as they are both Pomerols, although Petrus is grown in a more clay based soil. This small commercial property named after the Caribbean island the owner made his fortune on, is fortuitous in having famous neighbours, Le Cheval Blanc, Petrus and Figeac surround the estate showing that there is perfect terroir for outstanding wine, at a (relatively) affordable price. La Dominique is a very good Claret and has been hunting for the St Emilion Premier Grand Cru status. When I was there the chateau was cold and empty, and the business of picking a very scientific and commercial enterprise. This is modern french wine making focussing on heritage and quality. An excellent choice for a special occasion.