Anna recently moved into a 1930’s street. Yesterday there was a street party for the royal wedding. To visit her we drove through an empty town, and as we approached the residential streets the quiet was uncanny. No cars. Wide streets. We parked nearby and walked under the flapping bunting up the road. It was early and all the houses were still, the people watching television behind closed doors. 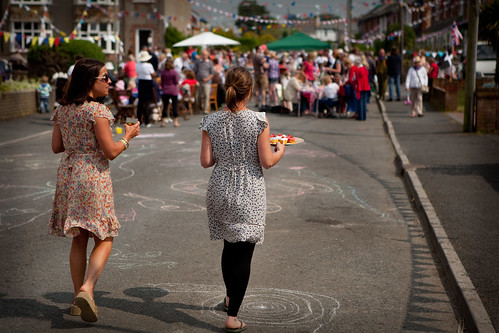 Later, after the wedding in London had finished, all the doors opened, chairs and tables appeared, cakes and teas of all descriptions, wines and beers in jugs and carafes, and pride of place in the centre of the crossroads a cake for the royal couple. 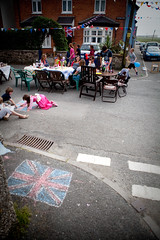 The voices rose in volume as the afternoon progressed. At half past six the road was due to be opened again, but none felt like moving and there were no cars on the roads anyway. As the sun went down and a chill descended the street cleared except for the youth, who hung around with cider and squeals. The noise of ongoing parties around fires in the back yards remained until after midnight. The vibe was timeless and quintessentially English, it could have been 1955, 1977, 1983 or today, for once time slowed and expanded.