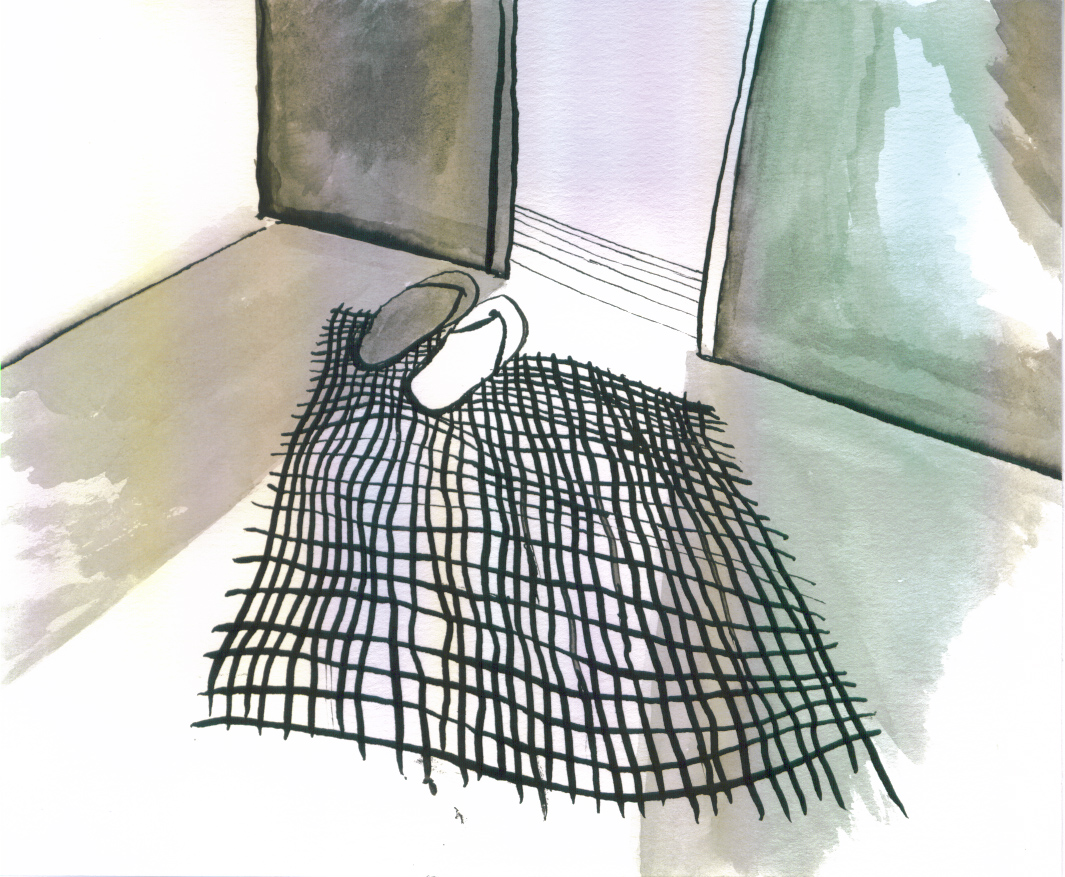 First morning: A mosquito fizz in his ear, one eye opening and a realisation it was the approach of dawn. He rose padding on bare feet across the grass mat in the basic kitchen, enjoying the texture. Yawning and loving the warmth of the pre morning, he felt just a slight chill on his waking body. He found some shorts on the door handle and pulled them on as he looked over the dark beach to the bay, some lines of white giving less of a signal about the state of the surf than the crisp snap and roll of sound coming from the point. He was surprised at how well he felt. The journey had been long.

He had been surfing for half a lifetime. He was tied inextricably to the thin merge of land and sea. At times he had railed against it, wanting to leave the coast for the moneyed city, to return with car and house and boat and freedom to not work. But he never did, he painted houses and helped the local builders. He went surfing because it seemed right.

He walked along the beach, wide awake now, although the sun still yet to rise, his surroundings still monochrome except a faint yellowing above the low hills inland, the sand cool under his toes and unmarked except for the crab prints racing to the sea. He felt a little sick and cold in his stomach, slightly nervous. He had eaten little for some days now. There had been a lot of drinking before he left, and the journey had been a mix of alcohol and sleeping pills, the flights a confusing memory of trying to get his head together for customs and wondering why fellow travellers weren’t interested in talking to him. Never mind, he had arrived, to the beach he loved, where life was cheap enough to stop worrying about funds for a while, where people remembered him for the good times, not his drunkenness, and where the waves were good enough to nearly scare him.

There was a time when he felt good about himself. In his early twenties he had been a beach lifeguard, in the village he grew up in. One summer, she arrived. She started work with him, without him being consulted and without forewarning. At first he was angry, then he tested her, trying to prove she couldn’t do the job, but she was able, and after a week of difficulties he began to like her. She had come from the other side of the world, to stay with relatives, to escape from her sheltered life, to live her own life. She had none to judge her, she had none to tell her what not to do. She had fun, she was wild, a freespirit in a community that had otherwise known each other from childhood. She had nothing to lose, she was making a big splash. All his peers wanted her, but it was with him that she laughed the hardest, and him she sung with at the bar, and with him whom she slept with platonically after being up all night (although he never slept, he looked at her), and him whom she eventually loved one morning after being up all night, (it was her first time, although she never told him).

As the greys of the night lifted to be replaced by yellows and pinks of a tropical morning, he saw that the surf was indeed good. A hundred yards offshore the reef at the point picked up the swell and threw it across the shallows. Not that big, but good enough for his pale, flabby grey body. When he had tanned, eaten well, and surfed more, he would welcome some power, today it was perfect to be small.

He walked on a little more to the end of the beach, where the sun was now lighting the rocks and cacti. It felt like the touch of god as it enveloped him in warmth. There was no hurry.

They became inseparable. At the beach friends surrounded them. He became expansive, humorous, full of tricks. They never wanted a day off. It was their space for a moment in time in the long history of that place.

Of an evening, and their work done they surfed with the setting sun. As the land cooled a fire would be lit, someone played guitar, all would accompany, singing or tapping on an improvised drum. Eventually they would grow tired and cold, the wood running out, the walk home a shiver of early hours dampness. He had never been happier. She started a fire in him where he never knew one existed. The people had never known better lifeguards. They gave the youth an interest in the ocean. Home caught Lobster, crab, bass and mackerel were eaten in plenty in many of the village homes that year.

He returned to his shack and ate fruit, slowly he pulled out his old board, fixing in fins, and a leash and rubbing in new wax, as he worked he looked at the sea- The light now flecking gold on the purple ocean, the clouds in the west now with definition and depth. Some fishermen the only humans on the shore, though he felt sure it wouldn’t be long before some other surfers ventured out.   He touched some zinc on his shoulders and nose. He lifted his board, looking at its shape, the short walk down to the sea, and the long paddle to the point.

That winter a chance encounter led to them being offered to rent a fine house overlooking the beach until the tourists returned in late spring. He was working for the local construction crew and earning good money. She had been asked to nanny for a new rich family in the area. Their house became the winter beach, and after many a cold communal surf on a Sunday morning the house would be full of people cooking a big lunch.

One evening he made a speech to their friends. They were to marry. A ceremony on the beach in the Spring, fly to the tropics for a surfing honeymoon, onto her family for more celebrations then back home for another summer. There were cheers all round, and an engagement party to be remembered. Bands played, Djs spun and many folk carried on through to the next evening.

He yawned as he began the paddle out through the shallows, watching tiny fish scatter around his fingers. There was still no wind as yet, and the seas in the bay hardly stirred. He watched a golden line of sunshine reflect in a wave out on the point, bending into the barrel. it was a little larger than he had first seen, around head height. It seemed so tranquil, yet he knew that the waves he watched were anything but. He made a slow sweep round to the take off point, sat on his board and lifted his arms to the Sun-God.

They stopped off on their journey to the other side of the world at one of the worlds best surfing locations. It was busy with other travelling surfers, but he felt fit and ready. She had never surfed such intense waves, the coral seemed nature perfect to scour flesh from bone and as she rose and fell along the waves the reef came in and out of focus through the clear shallow waters. He surfed it with abandon, those fingers of pain were sometimes only inches from his sun browned back as once again he failed to get out of the deep positions he volunteered himself to. His surfing had become sublime, she watched with pride as he surfed with new friends, as good or better than all, his surfboard as much a part of him as his heartbeat.

There came a day of big surf. They paddled out together, it meant a lot to her. She had never seen this size, he had been in waves as big, but never at such a shallow reef. For him it was a cumulative moment, he had never felt more ready for the wave of his life, it was so overwhelming that he failed to see her fear.

He took a wave and she heard him hooting all the way down the line, she laughed for him, though nervously, as she watched the sets. She hadn’t yet had a wave.

As he paddled back he saw she was in the perfect position for a perfect wave. She would be very deep if she managed the drop, but it would be the best wave she would ever have on this best of possible days on this best, most optimum time of their surfing lives.

He shouted for her to go, she prevaricated a moment, go, go he screamed, and she did, dropping in past his flashing smile. But she wasn’t smiling. From behind the wave he saw her disappear down the face and then nothing for a moment and then a hint of her body as she was caught in the water going over the falls. Something fell in his body and he started paddling to her. He waited for her to come up in the white water, nothing until he saw her face down as the water stilled. He swam to her, waves washing them down the reef, tumbling them over and over together until he eventually got her to the shore. They were both covered in cuts, he was sure he could bring her round, he knew exactly what to do, as did others, but no. The realization she had died was about twenty minutes after he had shouted at her to go, go, go.

Out at the point the reflective sea was now almost too bright for his eyes. His first wave had been fine enough; he had shaken off the slough of travel as he slipped down the line, weaving a route of no wetsuit freedom.

After a wave or two more he stopped being nervous.

After an hour he moved into a state of thinking no-thing, his surfing now an extension.

It took a long time for him to come home. He phoned her family for a long time and then he disappeared. He wanted to be no one. He would laugh at any attempt to befriend him. He worked a succession of basic grafting jobs. He washed dishes in hot steaming kitchens in humid heart of darkness cities. His monthly income was less than he would have once been paid in a day. He survived, though he was on the draining board of humanity, and sliding into the sink of lost souls.

Eventually he returned to the village, he found he could no longer get on with his friends, or his family. But it was home, and mostly he stared out to sea.

Waiting for sets and the gentle slap of wavelets pat, pat, pat on the underside of his surfboard, a metronome to his stilled mind, a mantra to his surfing, the sun high and white, the surf fast and clean.

And as so often happened now at this point, he broke down- Big salt tears splashing the hot bright sea. Surfing the one thing that meant so much to his life was also the trigger for his agony. In hell is paradise- The yin and the yang, the pleasure and the pain, the futility, the inevitability, and the years and the years.