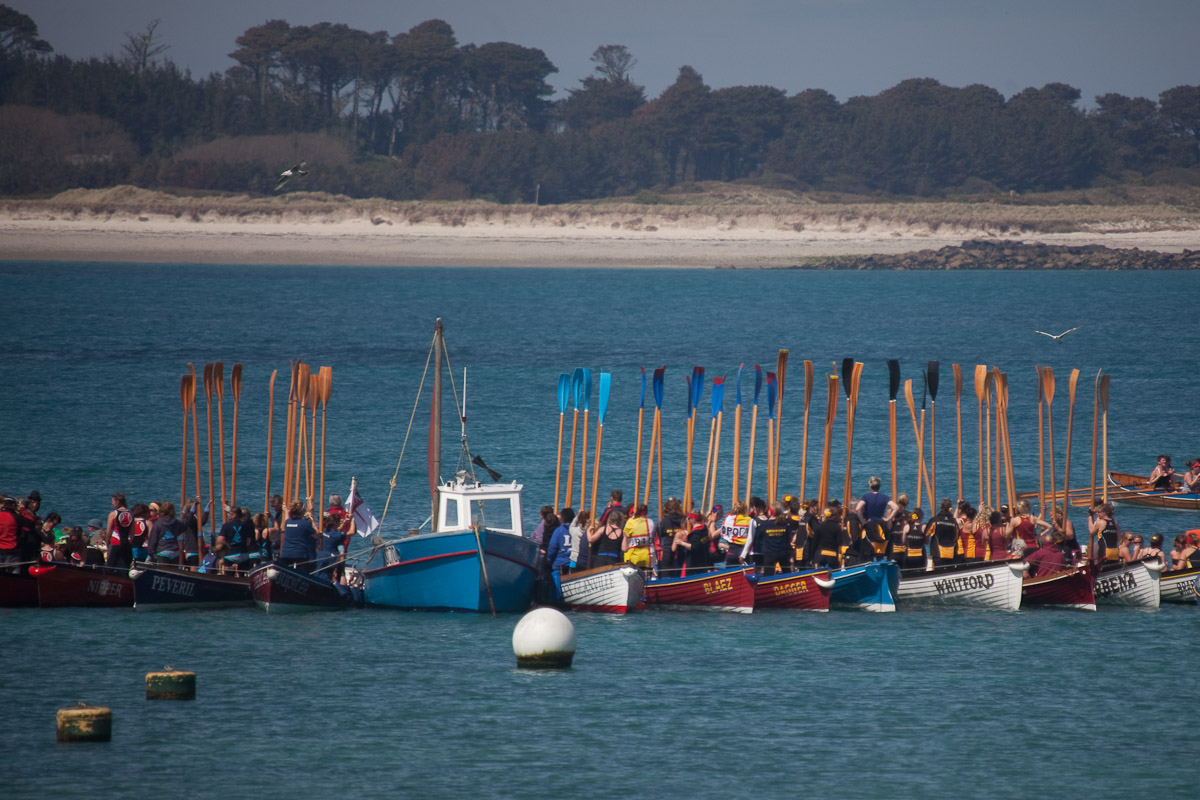 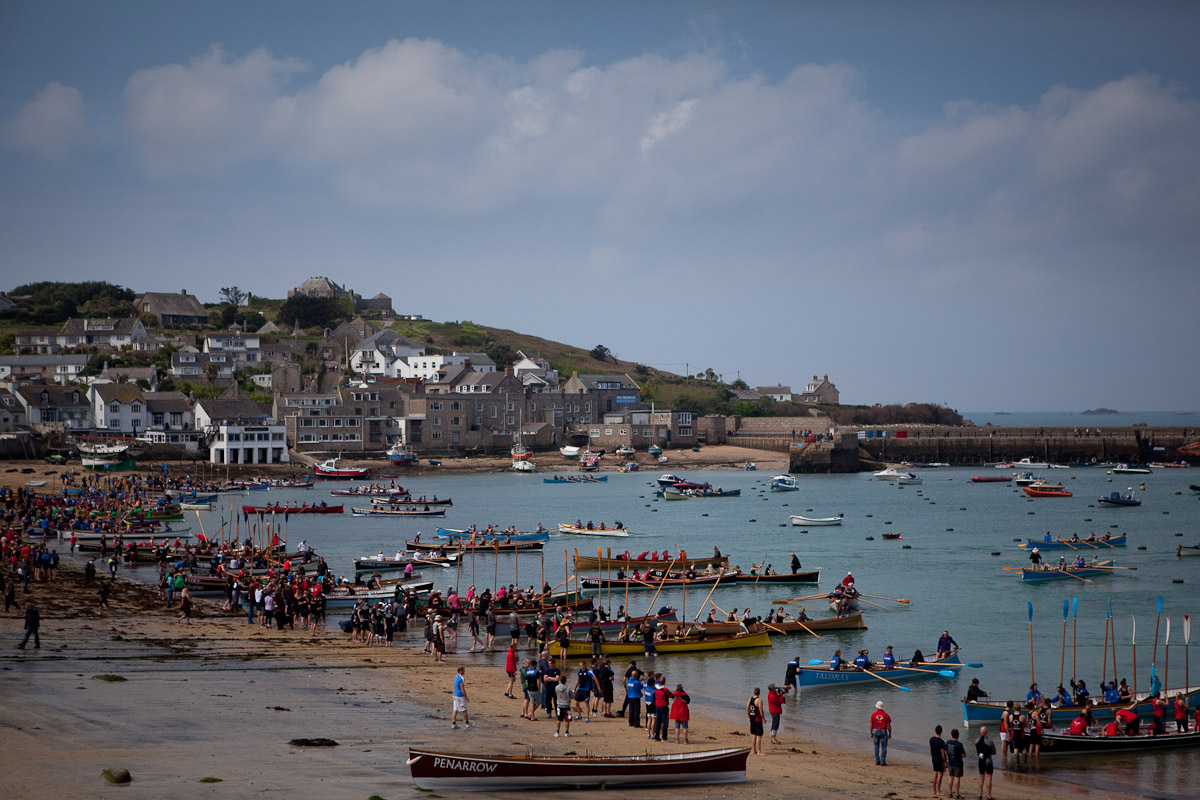 It was my first visit to the islands, and after arriving on a packed ferry at St Mary’s I saw several gigs pulling across the waters between islands in training for the upcoming races. On the long beach at Hugh Town a great many teams were lined up. Multi coloured boats covered the sands from one end to the other.

I had an hour or two to prepare for the first race and after meeting the team at the beach had a quick refreshing pint at The Mermaid, a fine old drinking pub close to the quay. 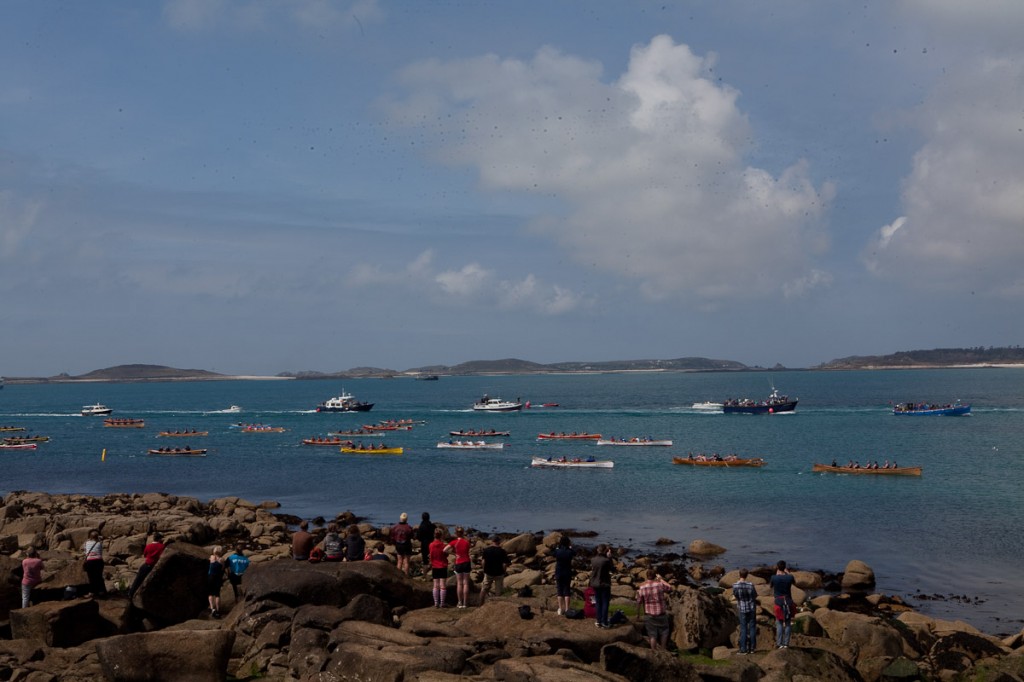 On the Friday night are the races for the veterans and supervets. At 8pm after a long row out we waited at the start line, almost a mile of gig boats numbering perhaps a hundred boats. The flag went down and we were off, pulling our hearts out, concentrating on timing, focussed. With boats closing and mixing oars, we held our line and powered on. I could see others in the melee forced to change direction. After twenty minutes it was over and we glided into the harbour happy with our mid placing. My arms were shaking, it took an hour to recover. By the time I had a light meal it was dark. The pubs were already alive with singing.

On Saturday I wasn’t asked to race so I soaked up the atmosphere and cheered on our teams from above the harbour. Hundreds watched each race, now the big races were finished and the heats began to sort each group into order. Teams in first or second went up, those who lost went down. With commentary from loudspeakers on the quay it was as exciting as a Grand Prix, and hundreds of spectators thronged the vantage points for several hundred metres. 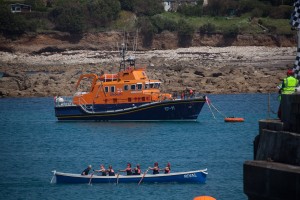 Here is Rival, with one of our ladies teams pulling very hard for the finish line. Rival was in the first world championships 25 years ago. One of the boats we competed against was The Shah, an island boat from St Mary’s used on the island since 1873.

On Sunday morning I found out I had two races to compete in for the Mens B team. In our first race we powered home in a close 2nd with much excitement to be going up a group. After lunch I watched the ladies finals with hundreds of others on Rat Island.

With all the mens boats now streaming out to the start there was a massive sense of excitement and anticipation for the finals. The final races are set with the slower boats going first with a few minutes between each group. The flag dropped for twelve of us and we powered between islands, this time wide of the pack and dropping slowly away from the leaders. 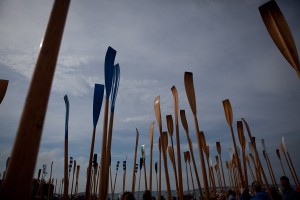 As we crossed the line we were two boat lengths or so behind the tight pack of boats, last in our group but not disappointed with our efforts. We slowly rowed in to meet the others gigs mooring up together to watch the finals. Drinks were found, shared and drunk. I gulped down some rum, before we all stood with our oars, roaring shanties and watching the boats fly in. At last the final could be heard approaching as cheers from the harbour wall drowned out the singing. Falmouth’s ‘Black Rock’ entered the harbour like a steam train, and then slewed in a wide arc to join the waiting boats. The Falmouth team had not touched alcohol since New Year. They had won again. The noise was incredible.

More songs, laughter and meeting new friends before we eventually all returned to the beach. People everywhere were already drinking and as the beach and boats were tidied great shouts could be heard at the prize giving. The pubs around the harbour seemed to be girding themselves in anticipation of the night, and as darkness fell empty kegs of beer began mounting up in the streets, arm wrestling tourneys began in corners of bars, and everywhere songs were heard in the cool early May air. 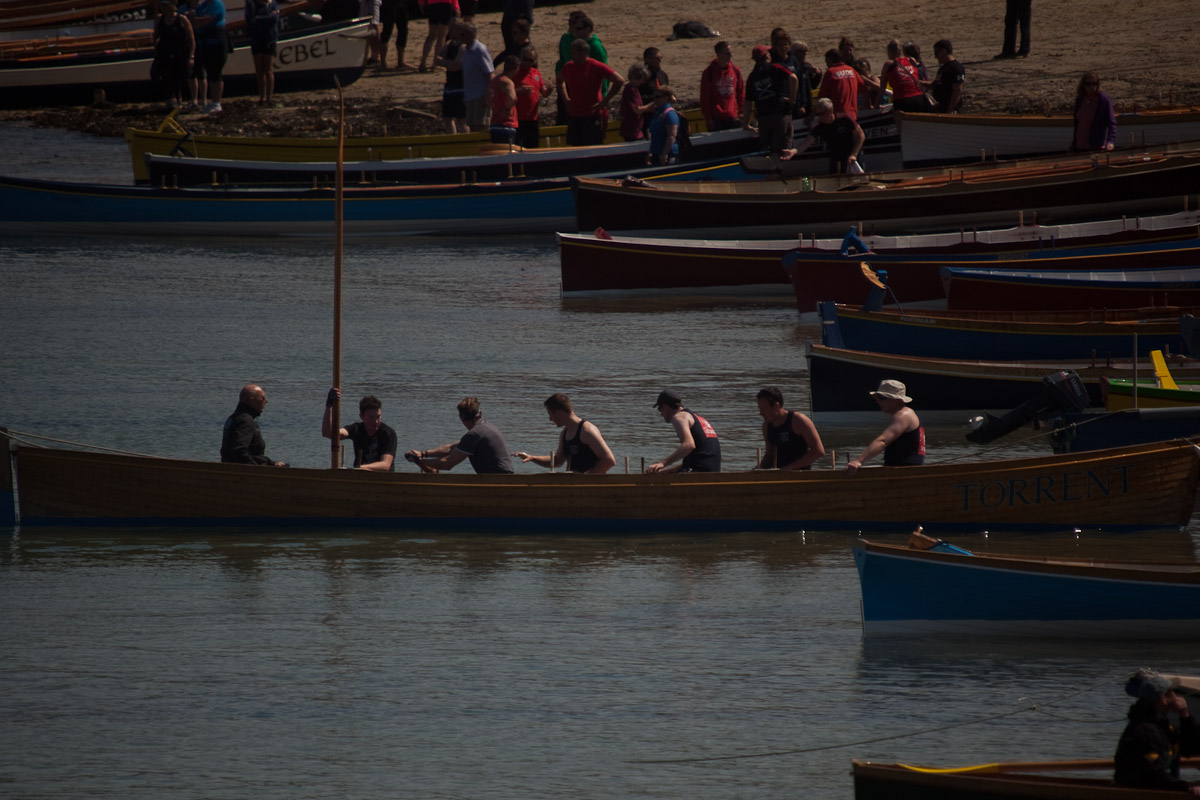 On Monday I awoke late, exhausted and with a few hours to kill before the ferry home. I slept off and on resting in the farmhouse we rented, before heading back into town to meet up with those in our team heading back.

Out on deck of The Scillonian on a cold blustery day I realised that lots of people had arrived on the quay to see us off. As the crane swung on the last of the luggage, a lone man on the quay began singing a low, slow, deep lament. I was a little far back on the boat and couldn’t hear the song but when others joined in the sounds drifted over the boat and were so very moving.

The boats horn sounded. Oggy oggy oggy was shouted from the boat with a massive response from the quay, and we left the Scillies. Oy.

(Oggy is a call from a pasty seller, Oy, is the response from a keen buyer).